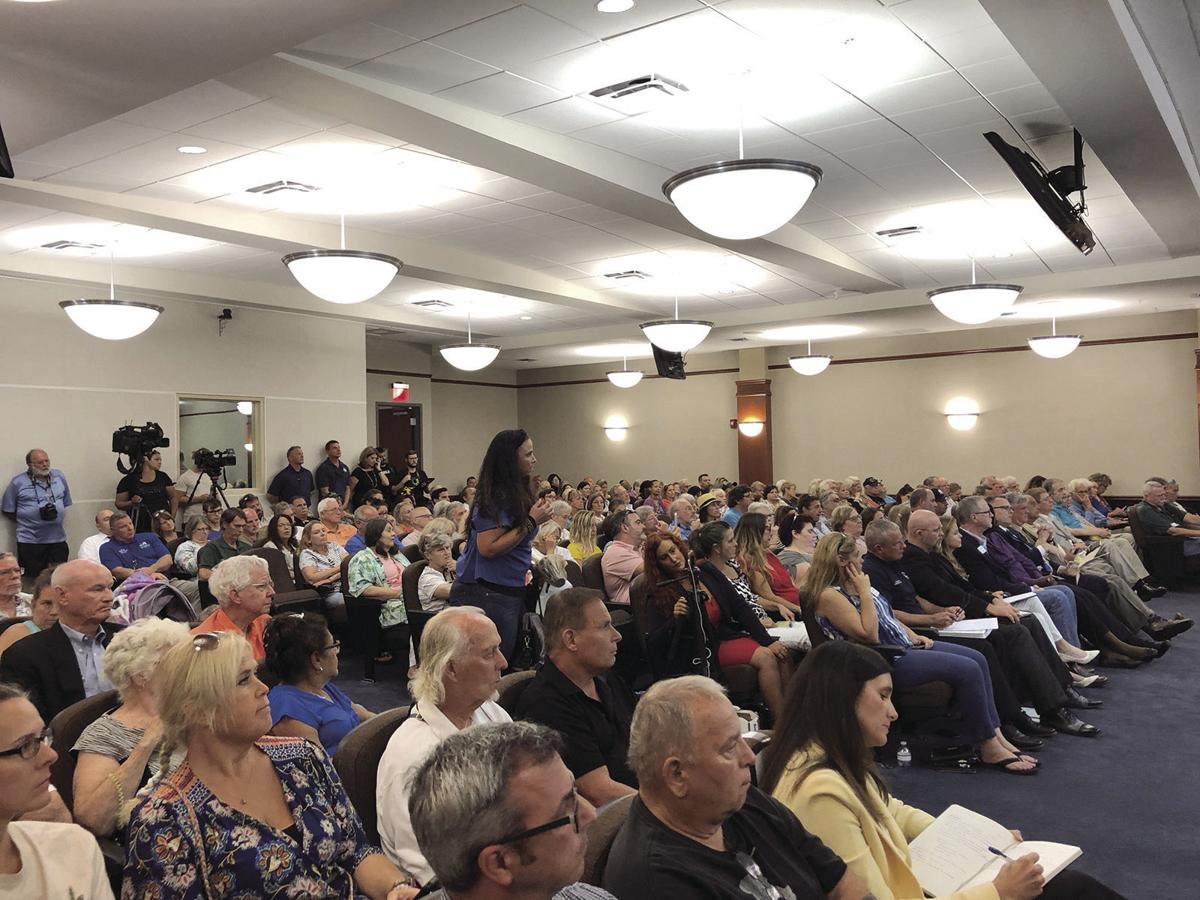 Over 200 attended the July 30 town hall meeting in Melbourne with concerns about the smell and color of their drinking water. 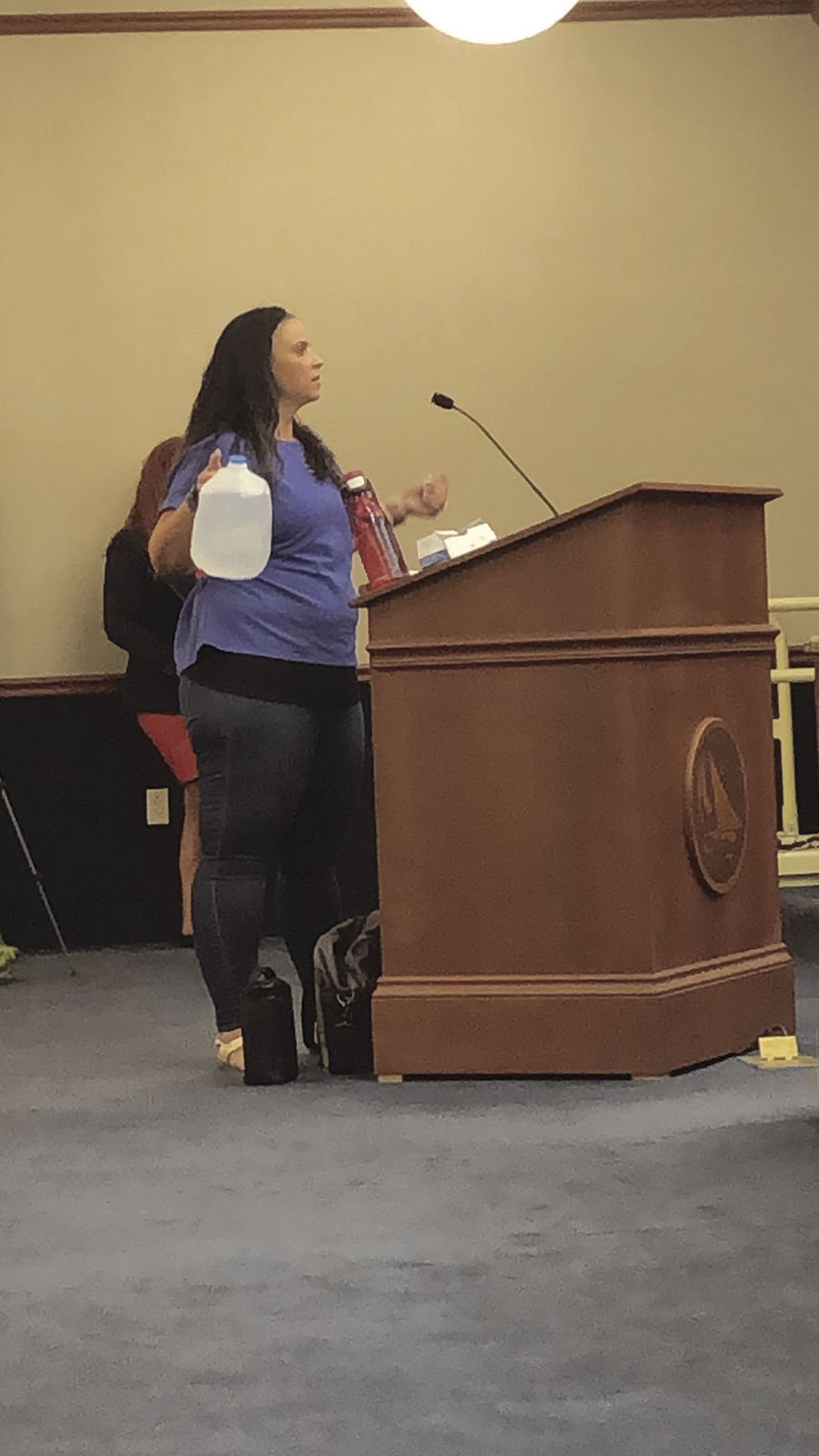 Nancy Kirby was one of many concerned residents who were worried Melbourne's water has been unsafe to drink. Mrs. Kirby stated that her water tested positive for coliform bacteria.

Over 200 attended the July 30 town hall meeting in Melbourne with concerns about the smell and color of their drinking water.

Nancy Kirby was one of many concerned residents who were worried Melbourne's water has been unsafe to drink. Mrs. Kirby stated that her water tested positive for coliform bacteria.

Rep. Fine stated that the meeting was intended to be a focused discussion about local water issues, not on water policies or globalized concerns.

More than 200 residents took the opportunity to vent frustrations and ask questions related to the safety of their drinking water.

After a recent algae bloom in Lake Washington, the city has had to alter its method of disinfecting the city's water. This has led to reports, upwards of 72 calls according to Ralph Reigelsperger, Melbourne public works and utilities director, of discolored or earthy, moldy smelling water.

About two-thirds of the city's water comes from Lake Washington, while the remainder is derived from wells.

"Algal blooms have always been present in Lake Washington over the decades we've been sampling it," said Dean Dobberfuhl, bureau chief for St. John's River Water Management. "It's not a new phenomenon. Our data doesn't suggest the rate at which algal blooms are increasing or that the intensity is increasing."

The officials were confident in their assessment that the water was safe to drink. Several of the water experts, including Rep. Fine admitted to drinking the water regularly.

After the introductions from other water officials, residents were given time to ask questions related to their water concerns.

"All of my children, including myself, have gone to the doctor. We all have upper respiratory infections," said Nancy Kirby, a Melbourne resident.

Mrs. Kirby stated she tested water in her own home after a neighbor received a positive test for coliform bacteria. Her water also tested positive.

According to the Department of Health, "Coliform bacteria are organisms that are present in the environment and in the feces of all warm-blooded animals and humans. Coliform bacteria will not likely cause illness. However, their presence in drinking water indicates that disease-causing organisms (pathogens) could be in the water system."

Mrs. Kirby went on to say that she had been in touch with individuals present at the meeting and that water testing was promised, yet at the time of the meeting no one had addressed her complaint.

"There is nothing worse than telling a mother of four sick children that her kids are not sick. It is disgusting, it is appalling as a mother and it is just a slap in the face to our city," Mrs. Kirby said. "My question is, with all the work that's going on on [Interstate] 95 and Ellis [Road], how old are those pipes that are being constantly dug up and constantly moved and pulled?"

Officials assured residents that the water tests had not tested positive for any sort of contaminants and that it was safe for use. Residents, however, noted discolored water and a moldy smell. Some residents even brought water for officials to inspect themselves.

"Is it possible that the water's fine as it goes from the pipe in the street but by the time it gets to my house there's something wrong with it?" said Rep. Fine.

Rep. Fine helped field those types of questions from constituents to officials and also prepared a list of resident's information who asked questions specific to their homes or businesses.

The city of Melbourne will continue to test and monitor Lake Washington's algae blooms during the peak of the summer season and maintained that informing residents of the water's status is their highest priority.