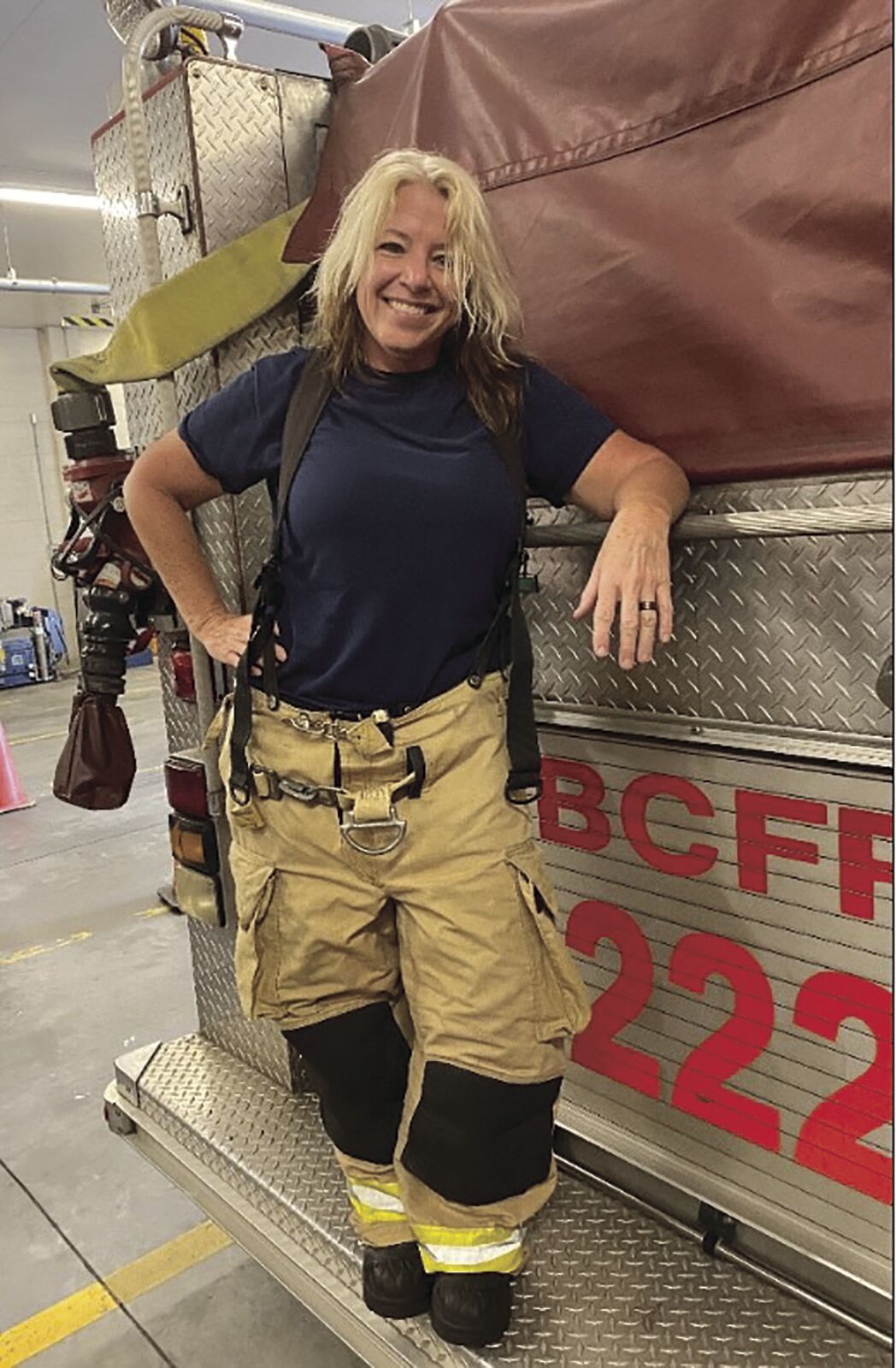 Janelle Hunt is the first female to be promoted to the rank of lieutenant in the Mims Volunteer Fire Department since 1958. 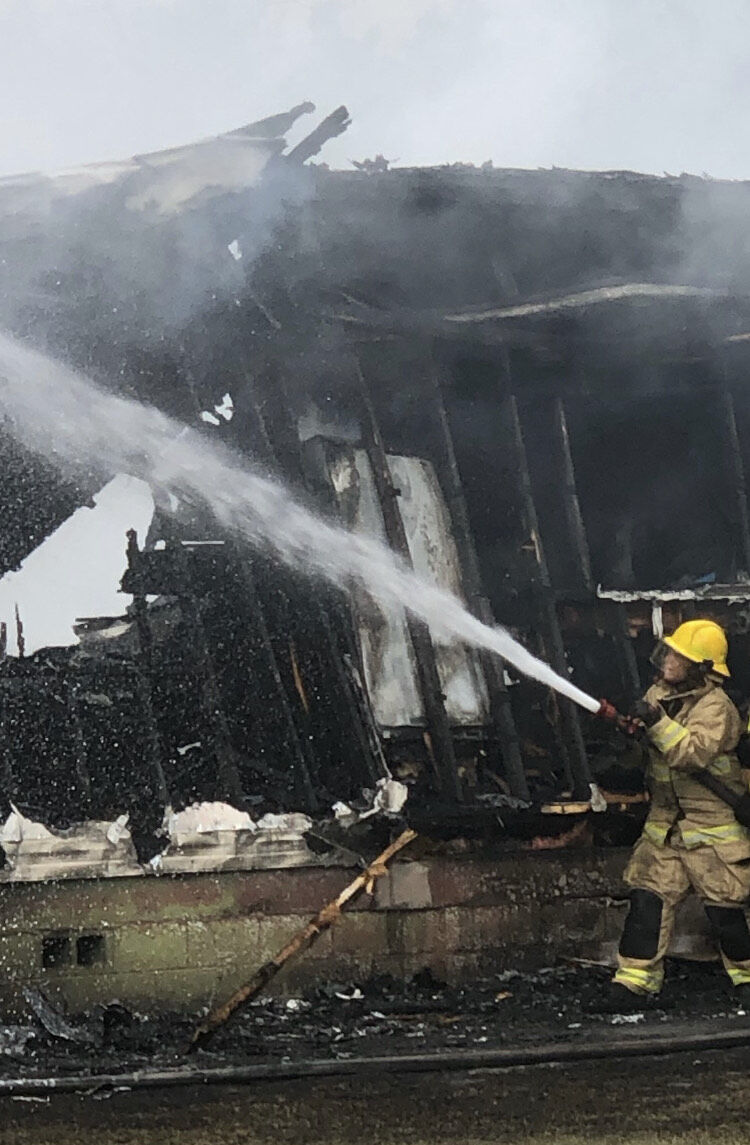 MIMS ― Janelle Hunt became the first female firefighter of the Mims Volunteer Fire Department to be promoted to the rank of lieutenant since 1958. The promotion came after applicants were screened by an independent promotion board and scored on questions involving operations (fire and ems), personnel management, and situational questions.

A Michigan native, Mrs. Hunt has lived in Florida for 20 years and in Brevard for seven.

"I had been in the dental field pretty much my whole life and I was kind of getting bored with it, wanted to try a new talent and I signed up for EMT school."

Mrs. Hunt enrolled in the fall of 2018 and during training the interest in firefighting presented itself.

"I'm not 18-19 years old out of high school I started this later in life and I'm sure people were thinking this lady is crazy why is she doing this,” she said.

Firefighting is a very physically demanding job, and for Mrs. Hunt the toll was often unbearable. Nevertheless, she stuck to her commitment and drive towards the vocation.

"I have a super strong support system. I feel like being a female you do have to try and prove yourself a little more because it is a male-dominated field," she said. "It was challenging at times."

Her success in the department and subsequent promotion are still surreal to her. Her personality grounded in humility and servitude, she considers herself just a person doing her job.

"It's quite an honor, actually. It's not real yet, I guess. I really don't know how to take it, she said. “I feel like I'm the everyday person who is going to volunteer to do a job. I just have a couple more letters in front of my name now."

The MVFD has a close relationship to the Brevard Fire Rescue station across from their headquarters. MVFD personnel are always on call to assist in fire containment, rescue, emergency medical calls and other first-responder duties.

"We back them up on calls a lot. Our phones go off all day and all night. If we can go, obviously, we mark ourselves in service and say we'll be at the station in five, 10 minutes or however long," she said. "Even if you're not first on the scene you can be a backup responder and help if there's a landing zone that needs to be set up or area coverage."

Encountering dangerous situations comes with any first responder role. Mrs. Hunt has dealt with not only fires but also assists in car accidents and emergency calls. To her, those are the most nerve-racking.

"People get fixated on the red lights and want to see what's going on. You're standing out in the middle of 1-95 and cars are still flying by. I think accidents are even scarier and running into a burning building."

Mrs. Hunt has seen a lot working for the MVFD. She emphasizes that critical thinking and compartmentalizing the stressors and fears she may encounter is crucial.

Mrs. Hunt sees her own success as a fully capable realization for other women who are interested in EMT or firefighting.

"I feel like if you have drive and dedication, if it's something you have your mind set on, it doesn't matter if you're male or female," she said. "We have one other female on staff with us right now. I feel like she has the potential to move up just like I did."

With some small apprehension from some of the veteran firefighters, Mrs. Hunt continued to prove her worth and overcome any physical challenges she encountered.

"You have to wear the same equipment that a male firefighter does. You just have to prove to them that you can put on and carry as much weight as they are," she said.

"I've had to prove myself even more-so to people. I didn't want people to think 'she's just that' because I'm Ryan's wife. When we're at home we don't really talk much about the fire service. We talk about calls but the business side of it - there's still a chain of command," she said. "He's still my chief and I still have to go through the chain of command. I'm still the boss of home, but he's the chief on the fire side."

Mrs. Hunt describes her relationship as a supportive foundation in which she's been able to grow within the department. Despite sometimes overwhelming circumstances, she proved through merit she has earned her rank.

"You build a bond with these people that you're going through the same things with, and it doesn't become a male/female thing anymore. You're a team and you just power through it."

With an outpour of support surrounding her, Mrs. Hunt aims to show women their ability to follow their passions the same way she has.

"I'm excited to see where this is all going to take me. If I had known about this amazing opportunity back when I was coming out of high school or thinking I was way too cool, I definitely would have loved to be in this industry way before I am now."

As for her future within the department, the sky is the limit in terms of her ambitions. She aims to gain more certification classes and wishes to provide encouragement and guidance to younger women looking to enter EMS or firefighting.

"It's so rewarding. You just feel like you're really doing something to help the community,” she said. “That's an exciting feeling. People respect you and count on you for certain things."