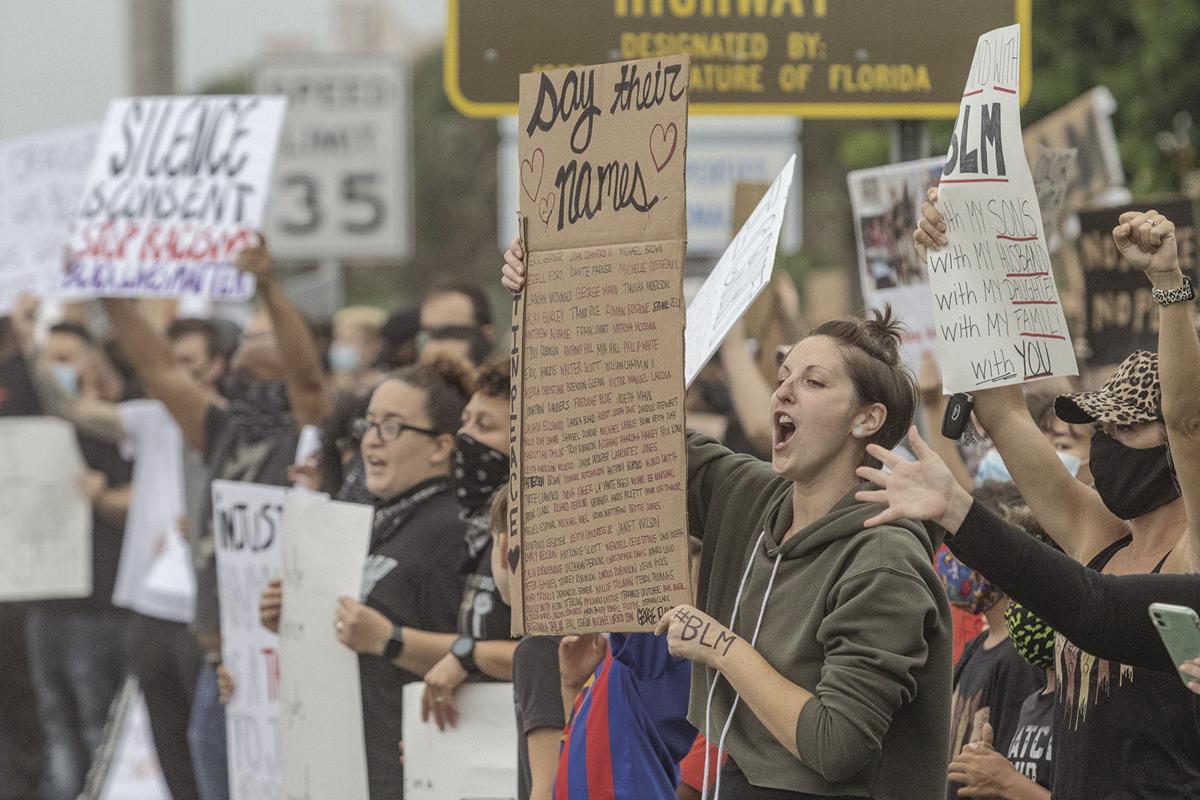 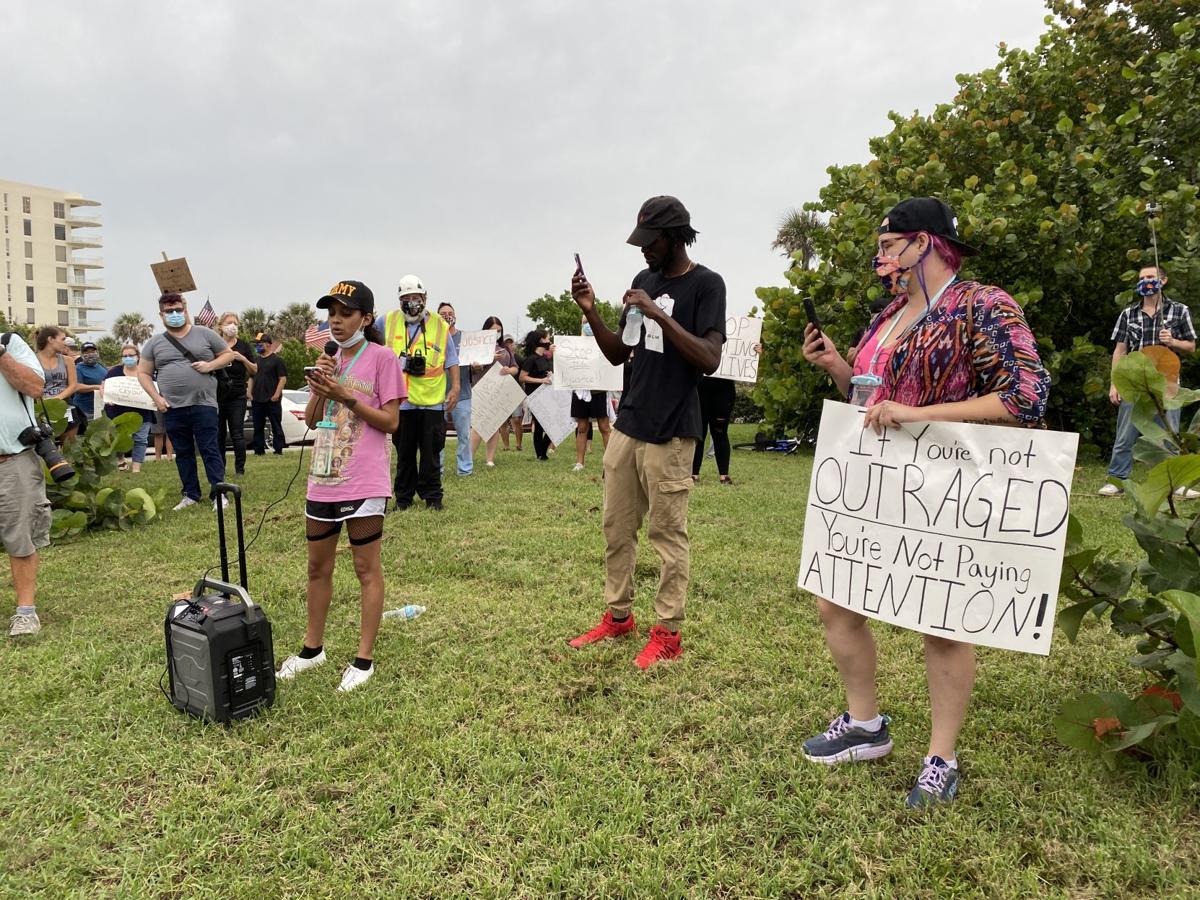 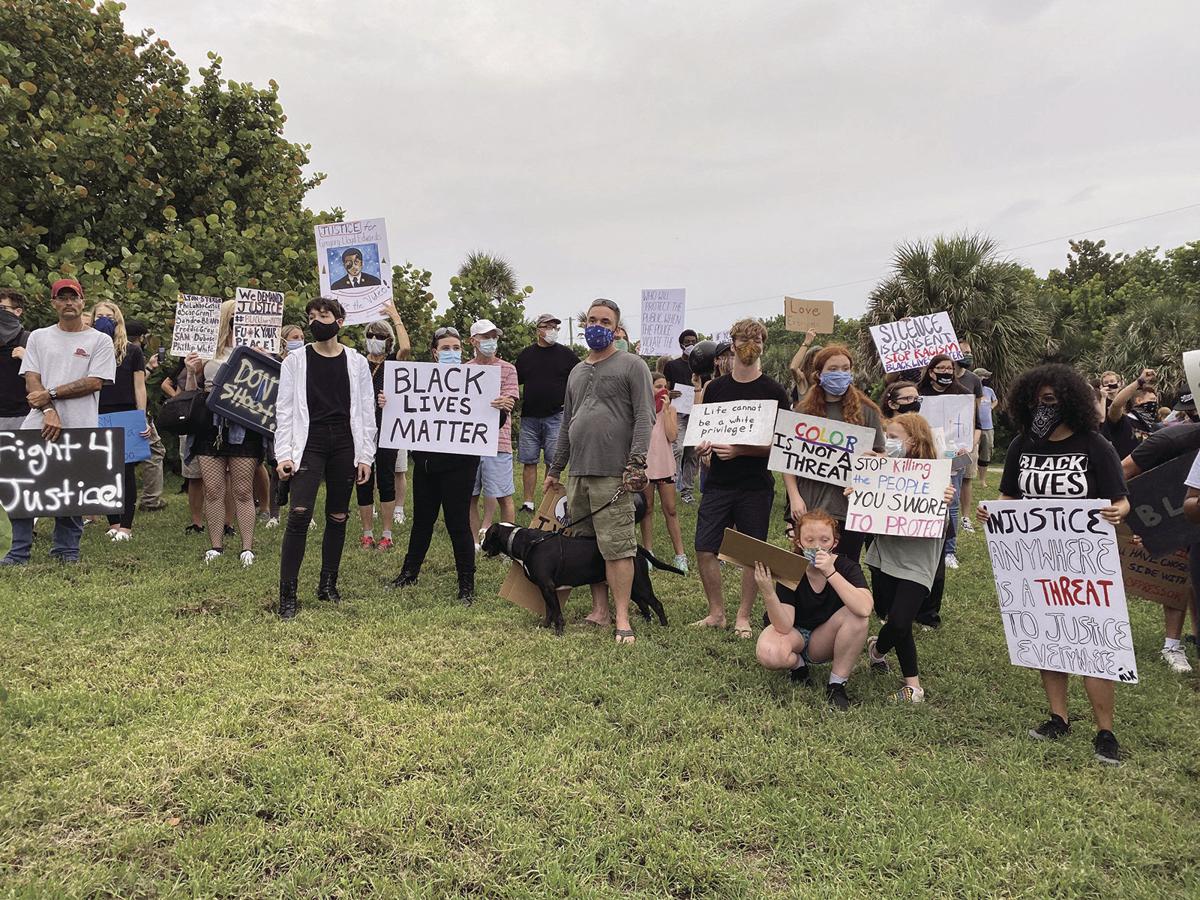 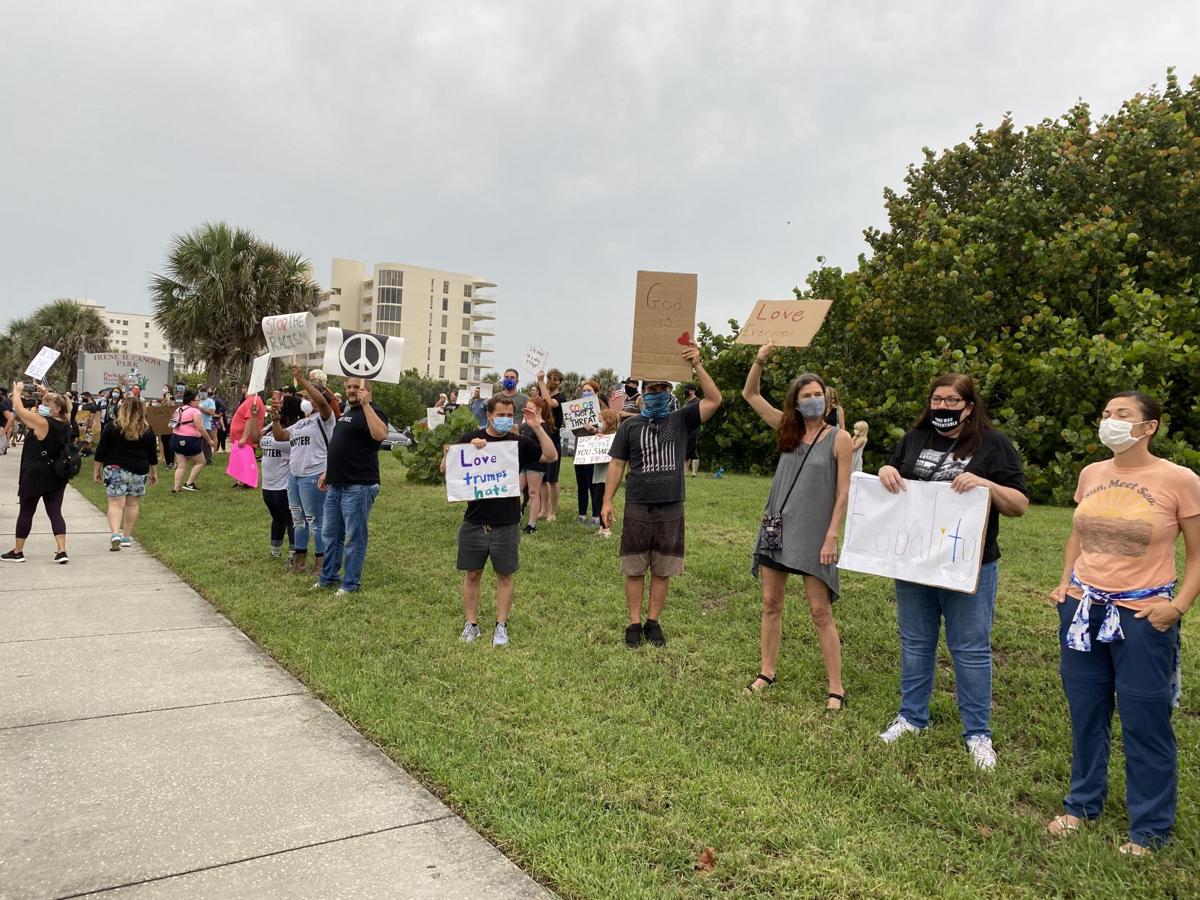 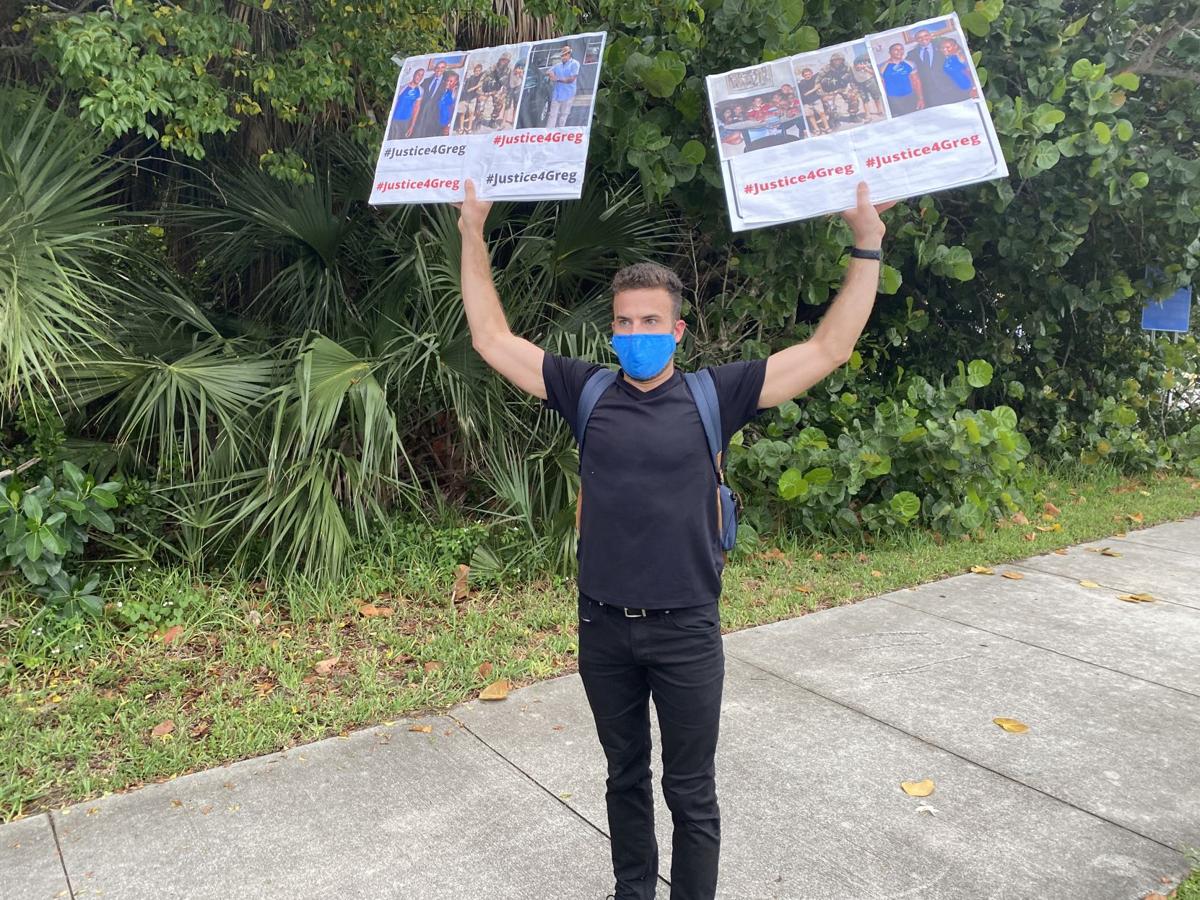 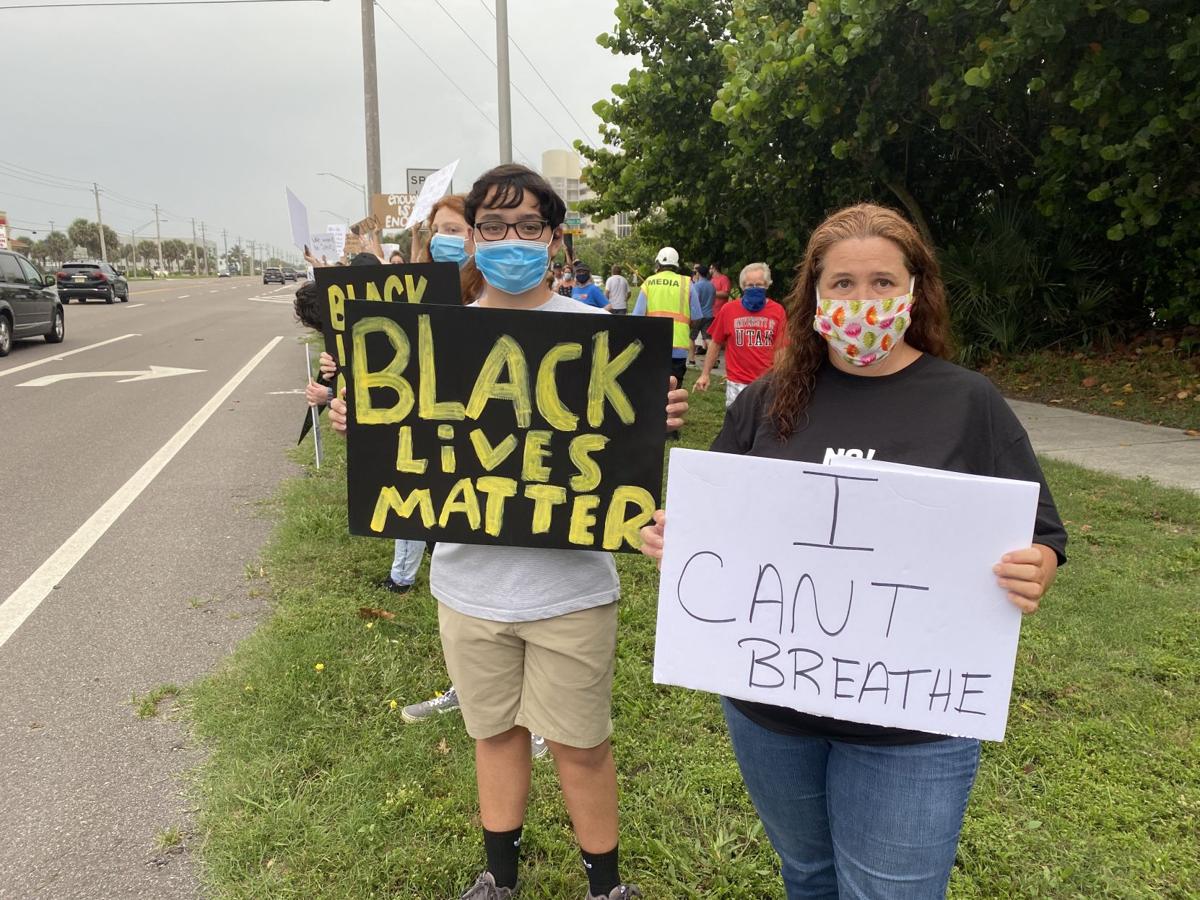 BREVARD COUNTY — Amid all of the protests taking place throughout the nation, residents have been stepping up to show their support for the Black Lives Matter movement.

The movement was kick-started after the death of George Floyd when a former Minneapolis Police Department Officer, Derek Chauvin, placed his knee on Mr. Floyd’s neck for 8 minutes and 46 seconds.

Mr. Chauvin faces a second-degree murder charge while the three other police officers who were present face aiding and abetting murder charges, as well as lost their jobs.

In Canova Beach, the weather held itself at bay as approximately 350 demonstrators gathered in a line along State Road A1A sidewalk beginning as early as 6:30 p.m. on June 6.

The peaceful protest was put together by Brevard Peace Keepers to provide awareness, to speak out against systematic racism and police brutality, and to ask for the release of the video tapes of Gregory Edwards, who died in the Brevard County Jail Complex in 2018.

“I want to thank every single person who came out to show your support and stand,” said Lauren Ogborn, BPK leader in a Facebook message after the event.

“I know we really made a lot of people proud of Brevard,” she continued. “I think the most touching moment for me was John Bridges had had the idea to take a knee at one moment, at 8:10. I had so many people saying things to me like, I didn’t know we had this type of support in Brevard at all.”

The protest had the support of local authorities, such as the Melbourne Police Department, who made a sweep of the beach after a discovery of piled bricks were found.

Ms. Ogborn said that whoever placed the bricks in piles wanted to make it look like the demonstrators planned to incite a riot.

Many demonstrators brought signs or made their own, with sayings such as “Enough,” “White silence is violence,” “We can do better,” “Just don’t do it,” and “All mothers were summoned when George Floyd called out for his momma.”

Event organizers encouraged people to spread out as much as possible to keep with the 6-foot rule, and a majority of the people in attendance wore their own masks.

“I’m over the racism. It’s been here all my life,” said Chris Shepard, a West Melbourne resident. “I just want to do what I can to support the community and to support all the different lives that have been lost throughout this process.”

Sydney Swadinsky, a member of BPK, said, “I believe that if white people are silent on this matter, that it promotes violence. I believe that I am obligated and responsible to help put an end to that. I want my white friends and my white family members to be unashamed to ask questions and unbothered to ask for help. At the end of the day, you want to educate and you want to inform.”

At 7:30 p.m., event organizers gathered to share some words about what this movement meant to them.

“Do your research, dig and dig again, read blogs written by a person of color, read articles, watch videos, read books written by black activists,” said Jaylyn Moultrie, one of the event organizers.

“Ask the people of color in your area about their personal stories, stories of their ancestors and the sufferings they have felt,” Ms. Moultrie said. “Then ask someone else and let that trend continue until you believe that you have a full understanding of what systematic racism feels like.”

Across the street from the peaceful protest were a group of President Trump supporters waving Trump 2020 re-election flags, a Confederate flag, U.S. flag, and yelling into a bullhorn.

“I think the biggest message here is that people need to stop and think and look around, show a little equanimity,” Ms. Ogborn said. “They [President Trump demonstrators across the street] won’t listen to us. They think this is about Trump. This is not a political thing. I’ve asked people not to show up with their signs or anything about Trump. We want to show our respect for the president. Republicans and Democrats alike don’t agree with racism and brutality.”

Ms. Ogborn added, “This isn’t going to be our last protest.”

For more updates on future events by this organization, search for “Brevard Peace Keepers” on Facebook.

This article is biased in so many ways. The protest should be labeled "Minority Lives Matter" or "All Lives Matter", by showing allegiance to "Black Lives Matter" you are supporting one of the most violent and racist organizations in our country. The quality of the political leadership in those cities/states coupled with those in Congress that are blatantly supporting the anarchy that is being displayed thru our country is disgraceful. Eliminate or defund the police, who gets harmed the most? Yes, the very people that these radicals are pretending to protect. The suggestion in this article to educate ourselves are to go to radical blogs, read books and articles by radical authors. Why didn't the spokesperson recommend a wide range of informative material, those that provide honest facts. No, to taking a knee, most of us understand that not everything America does is right but we are still the most liberated country in the world and the one that most people around the world want to emigrate to.

The problem of police brutality will not be solved by making it a racial issue. No one wants what happened to Mr. Floyd to happen to anyone.

We have good to excellent police departments in Brevard. I have lived here 28 years and I don't recall any of them tolerating bad behavior among their officers.

Should Police Chiefs be elected, like the County Sheriff is? I think so, or at least have periodic retain/replace votes by the people they are supposed to protect.

A Mayor/City Manager/County Manager are voted into office as the "leader of their domain", it is perfectly acceptable that they select the Chiefs/Sheriff etc., they also establish oversight panel's/committee's to both establish and review conduct. When there is a complaint of racism or police brutality within those Departments isn't it the responsibility for those elected officials to remedy the situation. Why are they left off the hook?