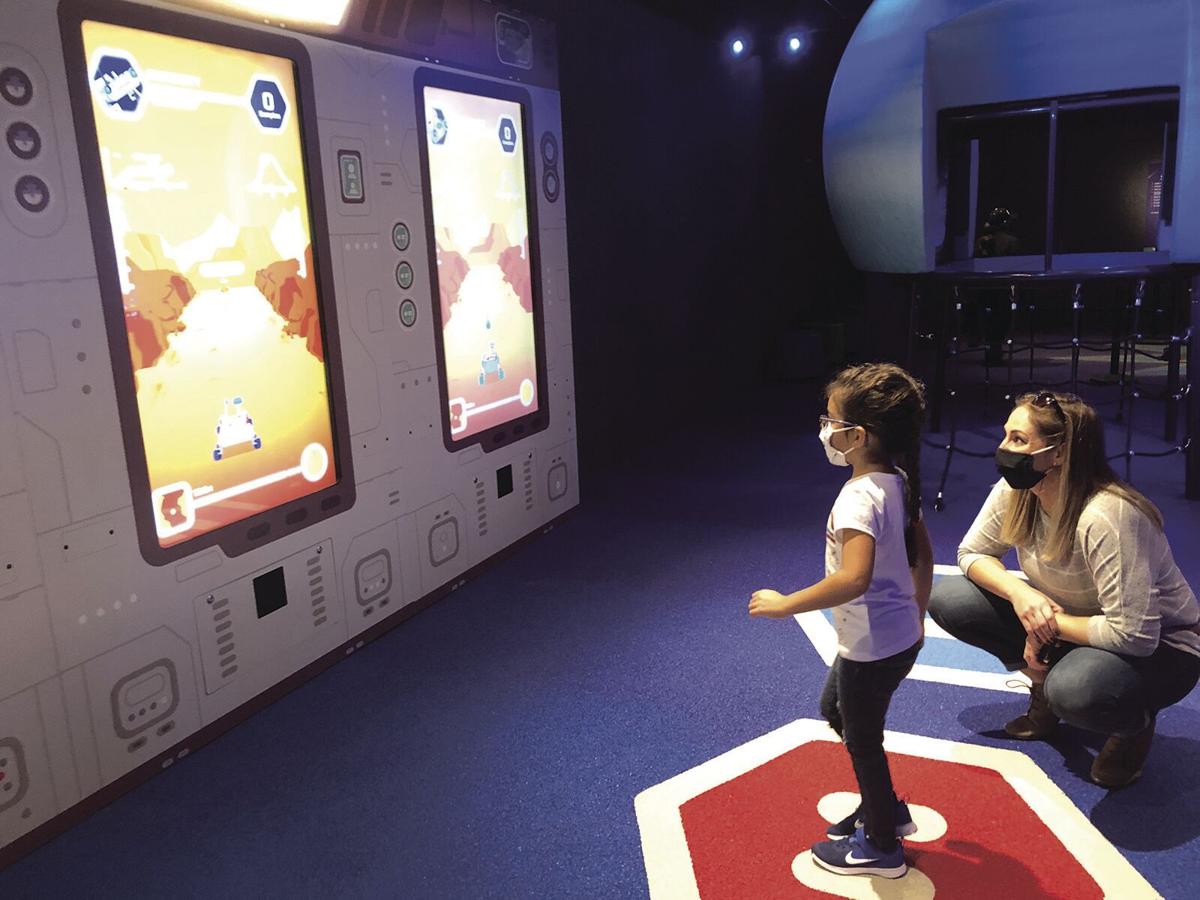 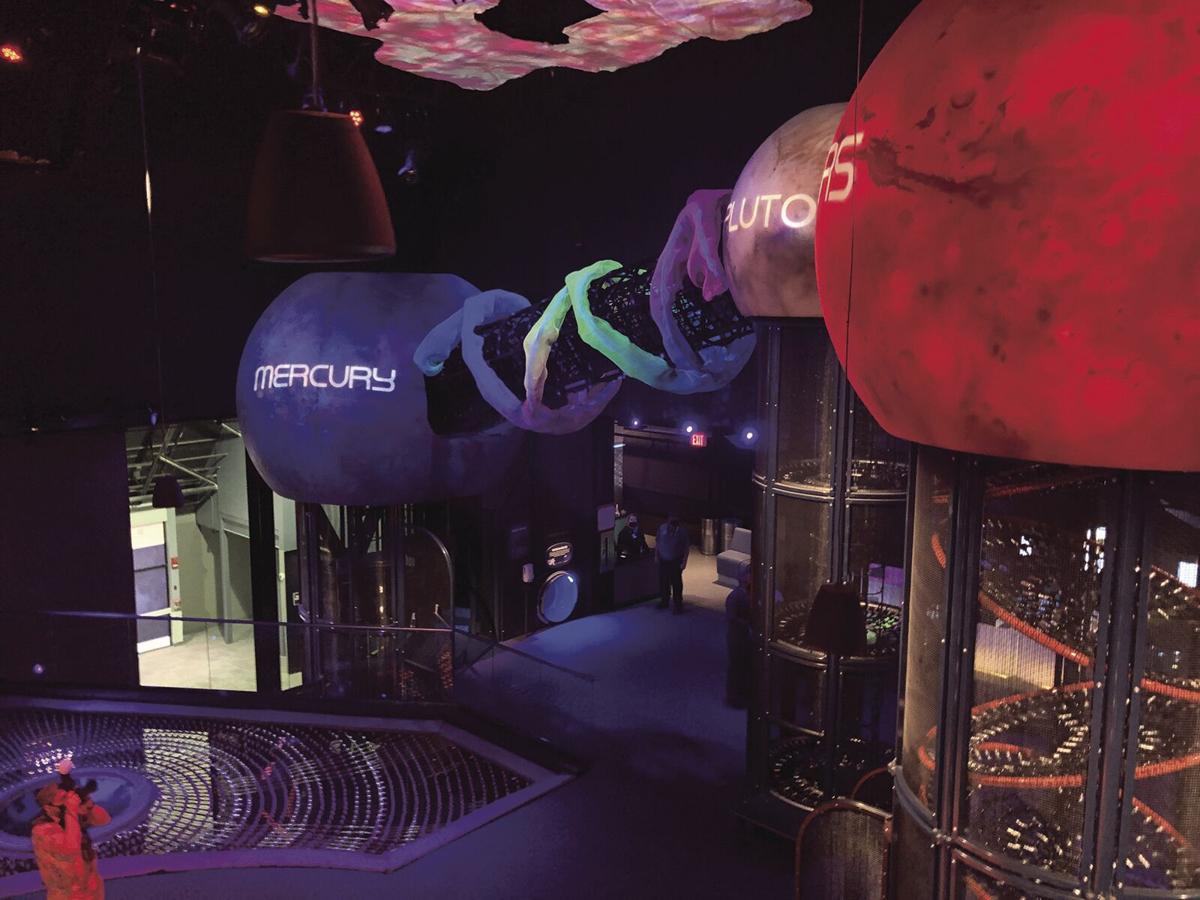 Lisa Kazboura and her daughter Kalea, 5, try out the "Rover Racers” and interactive attraction at "plant Play." The newest edition to the Kennedy Space Center's Visitors Complex which opened on Jan. 1.

“We are over the Moon to bring an offering to our visitors that will interest an even younger generation in space exploration and interplanetary travel,” said Therrin Protze, chief operating officer, Kennedy Space Center Visitor Complex. “This area will educate kids about technologies used in space exploration and the planets, in a fun, playful environment that we cannot wait to see come to life."

The attraction is housed in of one of two of the centers’ IMAX theaters that was repurposed for Planet Play. The overall development began in 2017 with three other concepts in mind. In the end, the decision to dedicate the area to the characteristics and specifics on the solar system made the most sense.

“We did some research on what we would change this to and what would it be in 2017," said Mr. Protze. "The research really supported it. Parents wanted a place where they could be inside out of the heat and let their kids just have fun and explore."

Mr. Protze spoke with children prior to a ribbon cutting. He explained the importance of knowing the planets that astronauts will one day visit, and that one day humans might reside on.

"We talk a lot about rockets and that's what we do, but what are they doing with them and what are all the satellites they're launching doing? That was a big thing for us," he said. "We wanted kids to start learning about the planets and what NASA is doing to learn about our solar system."

Planet Play has three levels each with a different set of activities devoted to planets, star charts, the moon, and much more. The first level features the Sun and the planet Uranus. Each planet is designed to simulate its actual hue and size differentiation to other planets.

"We didn't want to do just a playground. We wanted to something that would really have the opportunity to teach kids, obviously it's very physical other than digital since we're in this digital age," Mr. Protze said. "The whole goal was to be creative in how to make sure the kids are moving and being active, yet learning at the same time," he said. "That's our biggest inspiration."

One feature is, "Rover Racers” , an digital video game in which kids stand on a platform that activates one of four Mars rovers. The participant then uses their right and left feet to steer the rover accordingly to catch samples and earn points on the screen in front of them.

“My favorite part when collecting all the rocks,” said Kalea Kazbour, 5, who was visiting the Space Center from Tampa for the first time.

"She wants to go on a rocket," said Lisa Kazboura, mother. "We just redid her room as space for Christmas so we're very exited."

Kalea collected nine rock samples on her first try. She also confessed to being a personal fan of The Red Planet.

The second and third levels are where most of the interactive games and space to play is available. Although there are stairs that wind guest up the maze-like levels, kids will find their climbs to each level more exciting.

Netting, called “Space Time Fabric”, allows kids to freely climb through each level. A large solar flare erupts from the floor of the second level, while planets Mercury, Pluto and Mars illuminate in their respective colors above.

Eli Willis, 4, of Titusville, was excited to climb and slide down all the various netting and slides. He tried his hand at the moon rover, an interactive game about asteroids and meteors.

"I love it," said Leneah Willis, Eli's mother. "Especially being local I can see us getting a membership and sitting right here and saying 'have at it."

Adults aren’t left without entertainment, either. There is a area dedicated to parents who wish to relax while watching their children play. Two interactive tables service the seating area with trivia games for up to four players each. Guests can enjoy a beverage or snack with minimal interference from the rest of the attraction while also being able to keep a watchful eye on their children.

Other activity stations include a “Satellite Factor” in which children can color a design of a satellite, scan it, and have it appear on a large screen where it will float over an image of Earth.

Planet Play utilizes special guidelines in light of COVID-19 with sanitation centers available throughout the attraction. Cleaning crews provide sanitation throughout the day with staff also limiting the number of participants at a time.