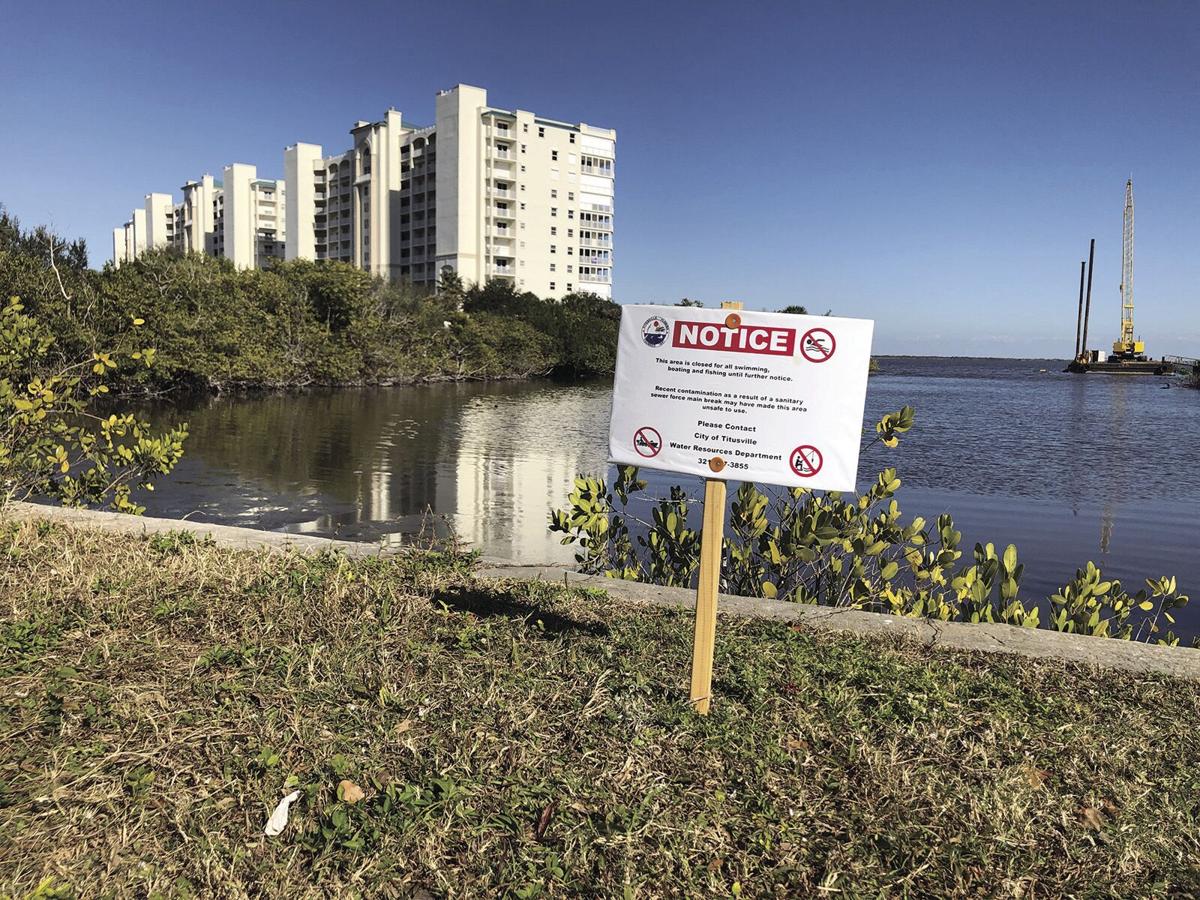 Signs deeming unsafe water are posted in Sand Point Park and Veterans Memorial after a recent sewage leak has contaminated the water. 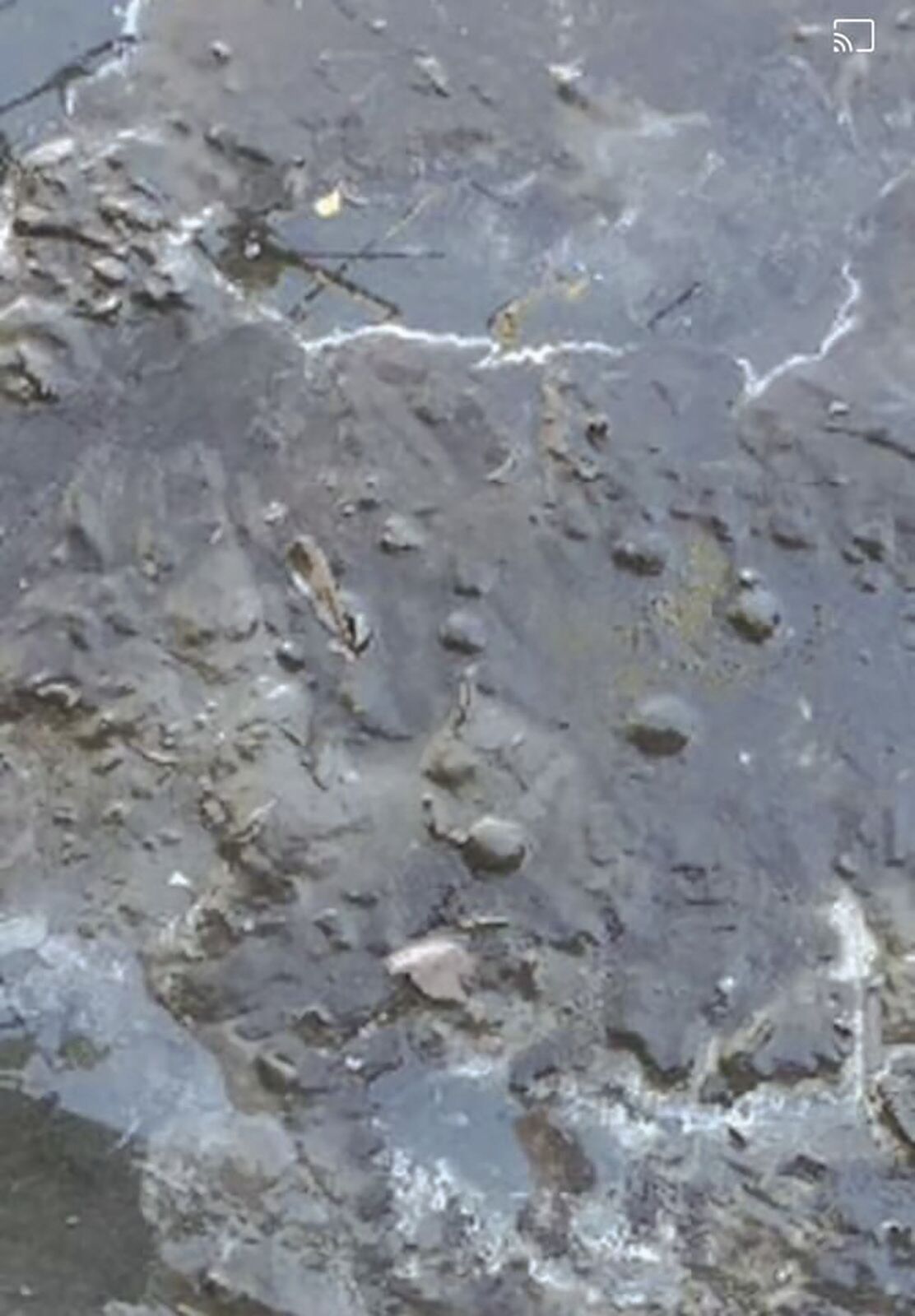 Raw sewage leaking into the Indian River has created a slug at the outlet pipe leading into the lagoon. 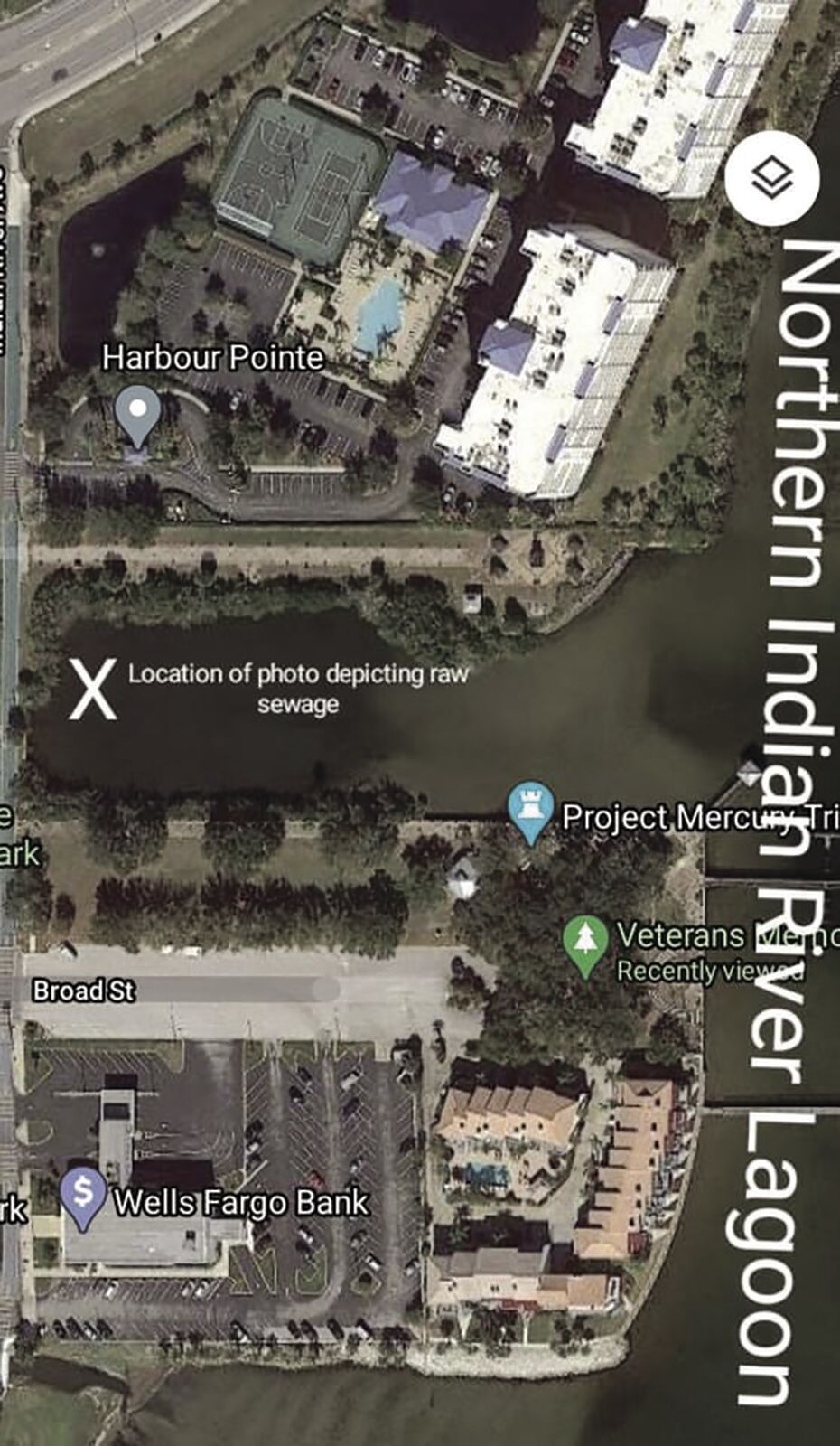 Aerial photo showing location of the raw sewage pictured above.

TITUSVILLE ― Although progress has been made to clean up the sewage leak at Sand Point Park, signs posted along the water suggest otherwise.

"Over a five-day period, The City of Titusville Water Resources Department worked to complete one of the most complex repairs of its wastewater system [has] experienced in 20 years: a leak in a sanitary sewer main located 10 feet below the surface of a stormwater pond and covered by a concrete slab," said Sean L. Stauffer Water Resources Director for the city of Titusville

According to Mr. Stauffer, approximately 1,156,400 gallons of contaminated water have been removed from the ponds as of Jan. 7. The water has been sent to the Blue Heron Water Reclamation Facility for treatment.

"City crews worked to expose the sewer force main located 15 feet below the surface of the pond. Once examined, it was determined that the main was leaking," Mr. Stauffer said. "Effecting repairs to the pipe were complicated not only because of its underwater location, but also because a 7’ x 55’ x 3’ concrete slab covered the pipe. Since jack-hammering the slab could lead to catastrophic failure of the pipe, the pipe had to be cut and new piping routed around the slab. In addition, repairs had to be made under time pressure as sewage flow from the contributing lift stations had to be shut down to complete the repair. By Christmas Eve the new line was connected and the repair completed."

A Christmas event was held at Sand Point Park on Dec. 19, Snow Days on the Space Coast, with families and children present.

Testing continues and result have been released to the public.

Signs have been posted around the ponds, stormwater drains, and other areas deems potentially unsafe. The signs read:

"Notice: This area is closed for all swimming, boating and fishing until further notice. Recent contamination as a result of a sanitary sewer force main break may have made this area unsafe to use. Please contact City of Titusville Water Resources Department 321-567-3855"

"These signs should have been posted as soon as the city was alerted to a fish kill in the ponds on Dec. 16. The dead fish were floating all the way to the Indian River Lagoon in the drainage ditches. Many birds were feasting on the contaminated fish," said Kay St. Onge, a Titusville resident. "I observed citizens gathering feathers on the ground that had been drained of sewage in the park. This sewage likely is contaminated with all manner of bacteria, herbicides, and pesticides. Even prior to the spill, due to algae blooms, the waters of the Indian River Lagoon have been deemed unsafe for swimming by Florida health officials."

One single sign is posted a half a mile south near Veterans Memorial Park in front of a access point to the Indian River.

A thin layer of muck and sewage was present in the retention pond adjacent from the river, however the lagoon outlet itself revealed a larger problem.

Two yards from the access point is a thick sludge. At first glance it appears to be muck, a common sight at the Indian River. However, the smell of sewage is present and after about 10 minutes of inspection, and becomes unbearable.

"The decision making process during this emergency response was first to protect public health, and second to protect environmental health," Mr. Stauffer said.

During the repairs, stormwater from the west pond overflowed into a series of stormwater ponds.

Residents have been concerned and confused as to why the signs have been posted along Sand Point Park. Resident Stan Johnson believes the signs to be ridiculous.

"They say it 'may have made this area unsafe' when it's most definitely unsafe," Mr. Johnson said. "This is a serious problem."

Residents and environmentalists held a March for Clean Water rally on Saturday, Jan. 9 to protest the public health problem the leak has caused.

"The citizens of Brevard have taxed themselves to clean up the Lagoon. Florida Department of Environmental Protection

has classified the North IRL as an impaired water that does not meet state water quality standards. The Florida Department of Environmental Protection Basin Action Management Plan has required the cities to fulfill many measures to restore the Lagoon," Ms. Onge said. "These ongoing sewage spills are negating these efforts. The City is experiencing a building boom, which will only exacerbate the current sewage issues. The sewage system needs a complete reconstruction."